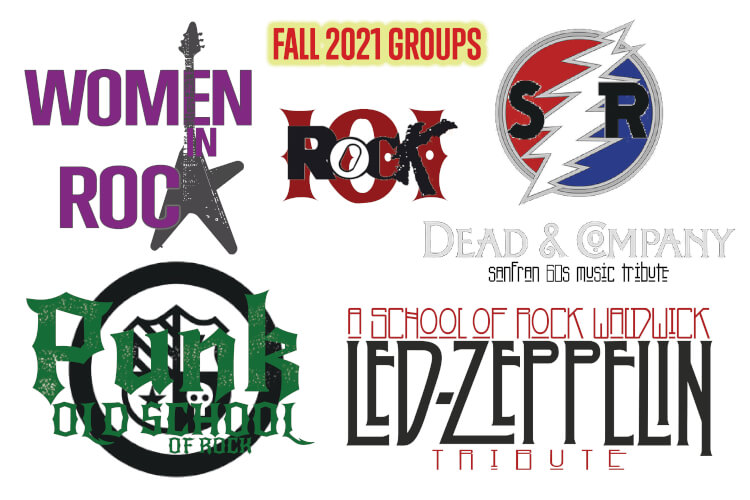 Zeppelin wrote the book on rock and roll - A little something for everyone, from hard rock to acoustic folk. Remember the first time you heard Stairway to Heaven? This show has challenges for every skill level - it will turn your beginners into intermediates and will transform your intermediate players into monsters.

We are offering 2 separate Led Zeppelin Groups: Tuesday or Wednesday from 6 to 7:30.

This show will encapsulate rock music that was performed by San Francisco-based rock groups of the mid-1960s to early 1970s. This era was associated with the counterculture community in San Francisco, particularly the Haight-Ashbury district, during these years. Known for their eclectic style, The Grateful Dead exemplify this era, fusing elements of rock, folk, country, jazz, bluegrass, blues, gospel, and psychedelic rock. Students will get to explore their improvisational skills while navigating the instrumental jams the Dead were famous for... no two performances are alike! This will be one of the most challenging shows this season. All instruments will have moments to stand out in this show. Each band member will effectively be playing a ‘lead’ instrument and responding to each other’s changes almost instantaneously to create magnificent, intense peaks and introspective, exploratory troughs.

Fast tempos and off-the-hook stage presence are the big lessons in this show. While Punk is a great show for less experienced kids (sounding legitimately raw is a success here!), it can still challenge more advanced kids. Old School Punk is the way to go the first time you do this show - The Clash, Sex Pistols, Ramones, Stooges, Bad Brains, DKs, Minor Threat, Dead Boys, plus some New Wave like Blondie, Devo, Patti Smith, Siouxsie and the Banshees. This show can support lots of students, we can realistically do 25+ songs and still keep the performance well under two hours.