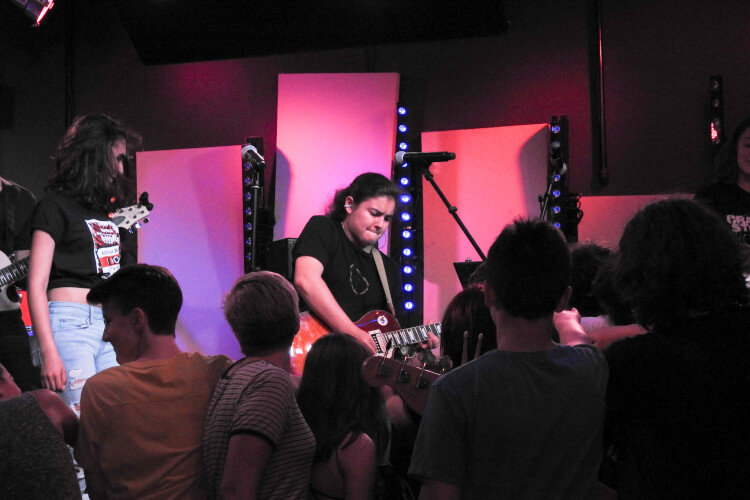 School of Rock on a Roll, Opening in Syosset

September 11, 2019IN THE PRESSCheck out longisland.com

school of rock on a roll, opening in syosset

The School of Rock is adding another location on Long Island, as this music school with a performance-based curriculum continues to expand around the globe.

When you mention School of Rock, many people may think of the movie starring Jack Black or the Broadway play, but  thousands of students have been flocking to a real music school with that name.

The movie shot scenes at Wagner College in Staten Island, while this School of Rock is very much the real thing, teaching students to perform and not simply play music. More locations are opening, as this School of Rock continues to attract both franchises and students.

After opening two Long Island locations in Rockville Centre and Huntington, Monica Rubin, a local franchisee, plans to open her third School of Rock location at 180 Michael Drive in Syosset next January.

“School of Rock is the world's largest and most trusted multi-location music school with tens of thousands of musicians going through our classes, workshops, camps and performance programs every day,” according to the school where performing is a key part of its core curriculum.

The School of Rock has grown to more than 30,000 students and more than 200 locations worldwide with franchisees from South America to Australia.

Locations in the United States include two in Arkansas, three in Arizona and 26 in California from Palo Alto to San Diego, San Jose to Los Angeles. Schools range from Colorado to Connecticut, Florida to Georgia, Iowa to Illinois and many other states.

You’ll also find School of Rock locations in Chile, Mexico, Canada, Brazil, Australia, Peru, the Philippines and South Africa as well as across the United States.

Long Island locations including various franchisees include Farmingdale, Huntington, Port Jefferson, Rockville Centre and Roslyn with Syosset in the works.

“We’re excited to bring our fun and interesting teaching methods to our third location on Long Island,” Rubin said. “We pride ourselves on giving instruction in an environment that fosters enjoyable learning and is more 'rock n roll' for the kids.”

When Rubin looked for a music program for her son Michael, she was like many people who thought of School of Rock as a movie and a musical, until she found out it’s also a real music school.

“I asked Google what we could do to ‘help our child find other kids to play music with,’” she said. “Google replied ‘School of Rock.’”

She researched the school, becoming a franchisee and part of what seems to be a movement in terms of music education.

"I had no idea that Google had not only changed my son's life," she said, "but the life of my entire family.”

The School of Rock, with programs for children and adults, focuses on lessons guiding students from school to stage.

While conventional music lessons can focus on classical music, School of Rock students focus more on contemporary songs. The idea is to make music fun and music education enjoyable and entertaining, helping create musicians and even helping launch bands.

“Many of our students have gone on to play in bands, perform at major concert venues and in other states and others even have become teachers themselves,” Rubin said. “We look forward to being able to keep bringing up the next generation of musicians with this new expanded business. “

CEO Rob Price, former head of 1,300-unit Edible Arrangements, leads the company that has turned into a global brand with musicians often teaching students not simply notes, but performance.

Rubin, from July 1 to 7, for instance, set up shows for a house band selected through auditions, leading to gigs from Washington, D.C., to Ohio.

The performance program consists of a weekly private lesson and a group rehearsal where students between the ages of 7 and 19 learn to play iconic rock songs with a band composed of their peers.

“Students are assigned songs and parts that are tailored to them based on their age, experience, and ability to learn new skills and concepts,” according to the school. “Students then work through their parts in weekly private music lessons, and refine the skills and concepts that those songs introduce.”

The goal is to prepare students for live performances with students every few months playing at venues in Manhattan, Long Island and Brooklyn.

“We started our School of Rock knowing that it would change the lives of those who walked through our doors,” Rubin said. “Our school is a clubhouse for our students. They have a place to express themselves musically and are challenged by the incredible teachers that are here.”