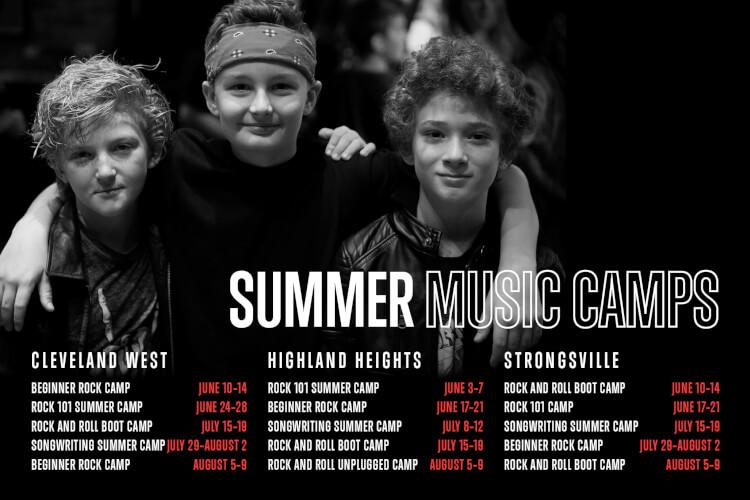 For more than a decade, local School Of Rock programs have offered a vehicle for children throughout Northeast Ohio to explore passion for music in the company of peers. The schools’ group-oriented, performance-based program has been feeding eager young musicians into the Cleveland music scene ever since. This summer, all three Cleveland School Of Rock locations will open their doors to children of all skill levels for week-long intensive camps which will allow players to join in on the fun and put their talents and practice to work.

Since 2007, SOR has created unique opportunities for children to take the stage at professional venues all over the city. One of which, the Rock and Roll Hall of Fame, has been a particular highlight for all involved. Lisa Vinciquerra, the Rock Hall’s Production Manager says, “The School of Rock kids have been performing at the Rock and Roll Hall of Fame for several years now and the talent and energy they bring is incredible.” She elaborated that she’s “...always so impressed with the musicianship and professionalism the students possess and they are continually crowd favorites.”

School Of Rock’s relationship with the local music scene is a symbiotic one. School Of Rock employs more than 35 talented working musicians and works with local venues such as the Beachland Ballroom, the Grog Shop, Brother’s Lounge and Mahall’s. “To see the growth of Cleveland’s music scene over the past decade has been righteous.” say Tommy Rich, Music Director for all three Cleveland School Of Rock locations. “We’re so proud of the players that we graduate into the scene, and it’s especially rewarding to go out to clubs and see these kids hitting with their own bands.“

This year, the school is planning to amp up its summer camp offerings. With a total of 15 options, including beginner camps for younger students, boot camps for experienced players and songwriting camps for those wanting to challenge themselves, this is the most ambitious year to date for the School Of Rock’s summer camp program. Each camp will create different opportunities for kids, such as exploring different playing techniques, getting on stage, recording a song, and taking part in various workshops with special guest speakers.

SOR guitar instructor and show director David Romweber discusses how productive SOR’s Rock & Roll Boot Camp can be, remarking, “Normally, we work a show season that is typically three to four months. When we work a summer camp, we have less than a week to put together anywhere from 12-to-15-song set. All these kids only have four days to learn three or four songs each. It’s hectic but it’s really fun, and when it comes together in that short of a period, it’s very rewarding for the participants.”

Romweber’s thoughts are reiterated by every student who’s been through the program. “I think it improves your skills to learn how to get things done quicker," says 9-year-old multi-instrumentalist Oliver who has been a student and camper for two years.

Imani, a recent SOR graduate and student at Oberlin College, had her first experience with the program through a Beginner Camp when she was young. It inspired her to enroll as a SOR student and study multiple instruments. Eventually, as a senior in high school, Imani assisted the very same Beginner Camp that brought her to the school so many years ago. “As a camper, I had to learn to practice not only multiple times a week, but in ways that gave me the most capacity to learn and grow as a musician,” she explains. “I feel that I had a very positive experience, which encouraged me to join SOR as a full-time student.” It’s a perfect example of how the experiences that these camps provide can be fulfilling and rewarding.

“This year’s summer camp program plans to be the best yet!” says Shelly Norehad, owner of all three Cleveland-area School Of Rock locations.

To enroll now, call your local School Of Rock: