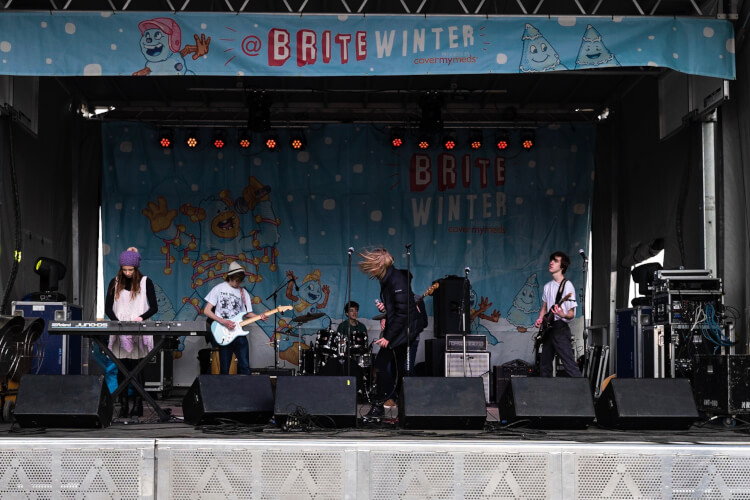 Since opening its doors in January 2007, School Of Rock has been a hugely positive influence across northeast Ohio. Between its three locations—Cleveland West, Strongsville and Highland Heights—hundreds of students of all ages spend countless hours every week honing a variety of musical skills as well as developing deep, lasting bonds with their bandmates.

The most challenging local program School Of Rock offers is also its most rewarding: The house band. School Of Rock Cleveland’s house band was formed in 2008.   Through annual auditions open to all three area schools, it puts together the most talented musicians, primarily aged 14 to 18.

“The house band gives something for kids to aspire to,” says Shelly Norehad, owner of School Of Rock Cleveland. “We have a lot of demand to play places all across northeast Ohio, so these kids get to represent the school in public.”

This summer they will be playing over ten local gigs in various venues including Bay Arts, Whiskey Island and several performances at the Rock Hall.

The band is directed by Tommy Rich, an accomplished musician who has spent decades on the road and in the studio as well as being School Of Rock Cleveland’s music director since its 2007 opening. He says the focus of the house band is advanced songcraft, where both he and each year’s band members bring a wide variety of songs to rehearsals to explore the nuances while challenging each other to reinvent the source material.

“We tear those songs down and build them back up in a way that’s unique to each year’s band,” Rich explains. “We do a lot of stuff that’s not well known, and that’s also part of the curriculum. We do original arrangements. They have to go out there and sell their version of these great songs and get the audience interested. That’s the focus.”

Each Fall, Rich holds auditions that draw from all three Cleveland-area School Of Rock locations, challenging prospective house band members to learn a song chosen by Rich without the help of their instructor, as well as prepare a solo piece to perform in front of himself and his panel of judges (also School Of Rock instructors and professional musicians), plus a question about music theory. Roughly 15 students are chosen to be in each year’s house band, and with that comes an exciting bonus: Touring.

While the house band formed in 2008, it wasn’t until a house band from another School Of Rock in Philadelphia came through Cleveland on a tour of their own that Norehad and Rich realized they could organize a tour of their own.  “The first tour we did, we teamed up with five other schools,” recalls Norehad, explaining how School Of Rock Cleveland partnered up with other SOR locations across the country for gigs—a practice they still use to this day, and one that is extremely beneficial for the musicians.

“They get to see other members of the same tribe, which is a rare thing at that age group,” explains Rich.  The tours, which can last up to two weeks and play multiple major cities, not only tests musicians’ chops, but it strengthens the chemistry between all the band members, making for a truly unforgettable experience.

“The difference when the team sets out on tour and when they come back is phenomenal,” Norehad says. “They work together better, they bond, and come back so much better, so much more in sync with each other.”

This summer, the band will meet up in Houston with the School of Rock Main Line (Philadelphia) house band and both teams will travel together, on the same bus, playing gigs in Houston, Austin, Dallas, Memphis, Nashville, Louisville and Chicago. In each city they will play with the local School of Rock house band, growing and making new friends through each musical experience.

School Of Rock Cleveland’s house band program is something truly special, and a must-see live act.  “I wanna feel each student’s soul when they perform,” Rich concludes. “People see us play and they leave amazed.”