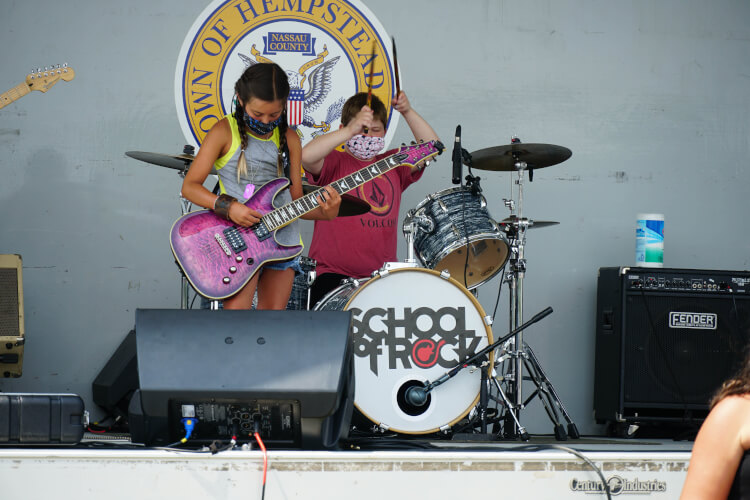 ROCK YOUR SCHOOL YEAR AT SCHOOL OF ROCK

Amplify your school year with our Fall Seasonal shows!  Students are assigned songs and parts that are tailored to them based on their age, experience and ability to learn new skills and concepts.  Students then work through their parts in their weekly private lessons, and refine the skills and concepts that the songs introduce.  Every few months, Performance Program students take the stage and play at local music venues in front of a live audience.

It's like a real zoo, but with ROCK!  This season, we'll be playing songs inspired by animals or by bands with animals in the name.  Listen to The Monkees, Def Leppard, The Eagles, Ratt, The Turtles and Scorpions.

ROLLING STONES vs. the beatles

The Rolling Stones and The Beatles were integral to the development of 1960s counterculture and popular music’s recognition as an art form.  In other words, they made being in a band “cool”.  By the mid 1960’s, both bands achieved international stardom, leading the British Invasion of the United States pop market and breaking numerous sales records.  The music created by both groups has been cherished ever since its release, and is regarded as some of the most influential art of all time (no big deal). Listen to:  “Hey Jude”, “Come Together”, “Paint it Black”, and “Satisfaction”.

A trio not to be trifled with, Rush has made their mark as one of the most commercially successful and influential progressive rock bands of all time. The band consisted of Geddy Lee (bass, vocals, keyboard), Alex Lifeson (guitar), and Neil Peart (drums, percussion, lyricist), each of whom have been acknowledged as some of the most proficient players on their respective instruments. Odd time signatures, spotlit bass parts, shreddy-yet-melodic guitar leads, and complex song form make this show a true beast.  Listen to “Tom Sawyer”, “The Spirit of Radio”, “Limelight”, and “YYZ”.

Grunge is an alternative rock genre (described as a hybrid of punk and heavy metal) that originated in Seattle, Washington in the mid 1980’s and later surged in popularity throughout the 1990’s.  A natural response to the glammed up rock stars of the 1980’s hair metal bands, Grunge is all about raw energy and authenticity.  Break out your distortion pedals and baggy jeans because this show is about to get SLUDGEY. Listen to: Nirvana, Alice in Chains, Sound Garden, and Stone Temple Pilots.

Metal and radio have never had the greatest relationship.  That is, until Ozzy’s Boneyard. Since its debut in 2001, the XM radio station has become one of the most popular stations for all things Hard Rock and Metal.  Expect harmonized guitar leads, blazing riffs, thunderous drums and bass, and air raid siren vocals. You’re definitely gonna need to turn it up to 11 for this one. Listen to: Iron Maiden, Ozzy Osbourne, Judas Priest, Dio and Black Sabbath.

As if one wasn’t enough, we’re throwing TWO guitar gods your way.  Jimi Hendrix and Eric Clapton were both prominent figures on the instrument who made their biggest waves in the late 1960’s and early 1970’s.  Their playing style and the music they created (across their many musical projects in Claptons case) without a doubt reshaped the way the guitar and Rock was perceived by musicians and casual listeners alike.  This show may be named after guitarists, but don’t worry.  This music is timeless and has plenty of great drum, bass, keys and vocal parts to chew on.  Listen to:  “Purple Haze”, “Voodoo Child”, “Layla”, and “Sunshine of your Love”

FALL OUT BOY VS. MY CHEMICAL ROMANCE VS. PANIC! AT THE DISCO

In the mid-2000’s, Punk music experienced a major resurgence and these 3 artists were at the forefront of it all.  Warped Tour and MySpace helped build these artists from the ground up, and before long they were national phenomena.  Their music had the energy of punk, the niche appeal of emo, and the songwriting chops of pop. Each of these artists have maintained relevance over the years, whether it be through rumors of, and eventually actualized, reunion (MCR) or adapting their sound to fit the modern popular music landscape (FOB, P!aTD).  Listen to: “I Write Sins Not Tragedies” “Thnks Fr Th Mmrs” “Helena”

FOR MORE INFORMATION ABOUT OUR PROGRAMS, CALL US TODAY AT 516-234-ROCK (7625) EXT. 2 OR EMAIL US AT ROCKVILLECENTRE@SCHOOLOFROCK.COM