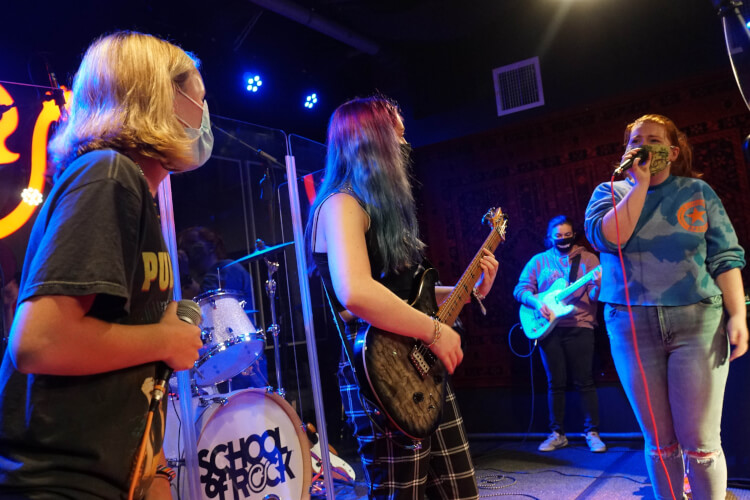 ROCK OUT THIS SPRING!

This season, Rock 101 will be following the rainbow of rock and roll! Check out songs and bands with colors, including Paint it Black, Yellow Submarine, Roadhouse Blues, Brown Eyed Girl and more.

THE BLACK KEYS VS. THE WHITE STRIPES

"Put these two bands together and what do you get? A piano! Now that our bad joke is out of the way...The White Stripes, formed by married couple Jack & Meg White were an American rock duo active in music from 1997-2011. Featuring influences from garage rock and blues, this group’s compositions focused on on a raw simplicity of composition, arrangement, and performance. Their last three albums, Elephant, Get Behind Me Satan, and Icky Thump have all work the Grammy Award for Best Alternative Music Album. The Black Keys, yet another American rock duo, is made up of Dan Auerbach on guitar and vocals and Patrick Carney on drums. They started out by building an underground fanbase through extensive touring of small clubs, frequent album releases and musical festival appearances. Their popular singles “Tighten Up” and “Lonely Boy” each won three Grammy Awards.
Listen to:
The White Stripes: Icky Thump, Seven Nation Army, The Hardest Button to Button, We're Going to be Friends, Hotel Yorba
The Black Keys: Lonely Boy, Gold on the Ceiling, Fever, Your Touch, Tighten Up, Strange Times"

New Wave, which may consider the beginning for electronica, grew out of the punk scene of the early 70’s. It was defined by its gloss and many bands made fun of themselves with over the top dress and posturing. It is characterized by the use of electronic instruments, busy guitar melodies, intricate percussion, and lots of color.
Listen to: Blondie, The Cure, Duran Duran, New Order, INXS, Depeche Mode, Echo and The Bunnymen, Siouxsie and the Banshees, Nena, Roxy Music, Talking Heads, B52’s, The Cars, Elvis Costello and more."

GUARDIANS OF THE GALAXY

We're going up, up and away with this next show! Guardians of the Galaxy is not just a series of great movies, they've got excellent soundtracks to go along with them. This season will be dedicated to jamming on Star-Lord's playlist of epic proportions. Listen to Mr. Blue Sky by ELO, The Chain by Fleetwood Mac, Don't Stop Me Now by Queen, Surrender by Cheap Trick and more!

Three legendary bands in one glorious package. In the 70’s and 80’s all three of these bands not only pushed the boundaries of what mainstream rock could encompass, but they truly helped bring meaning to the term “rockstar”. These were bands that were larger than life, both in their eccentric makeup-laden image and arena-ready anthems. Prepare your rock stance because you’ll need to call on some serious star-power to take on this trio!

Rock and Roll history is littered with bands who never followed up on the promise of their biggest, and only, hit song. No matter what decade their brief stardom originated in, these One Hit Wonders have been mostly relegated to bargain bins and trivia contests. But their great songs live on! This super fun show celebrates all those songs from the 60s through the 2000s that you know by heart - even if you can’t remember the names of the bands who actually recorded them!
Listen to: Epic by Faith No More, 500 Miles by The Proclaimers, No Rain by Blind Mellon, 867-5309/Jenny by Tommy Tutone, Lovefool by The Cardigans; Eye of the Tiger by Survivor, etc. See Less

Don’t worry; unlike their most recent album, we’re not making you wait 13 years for this show. Ever since their debut in the 90’s, Tool has continued to cement themselves as one of the most important bands of the modern generation. Vocalist Maynard James Keenan, guitarist Adam Jones, bassist Justin Chancellor, and drummer Danny Carey have all had massive careers and inspired influence on their respective instruments. Their aggressive strain of Drop D driven, psycahdelic progressive rock has charmed the hearts of metal and rock fans like no other. The band is also widely regarded for it’s heavy emphasis on visual art, and Carey’s disjointed creative rhythms/grooves.