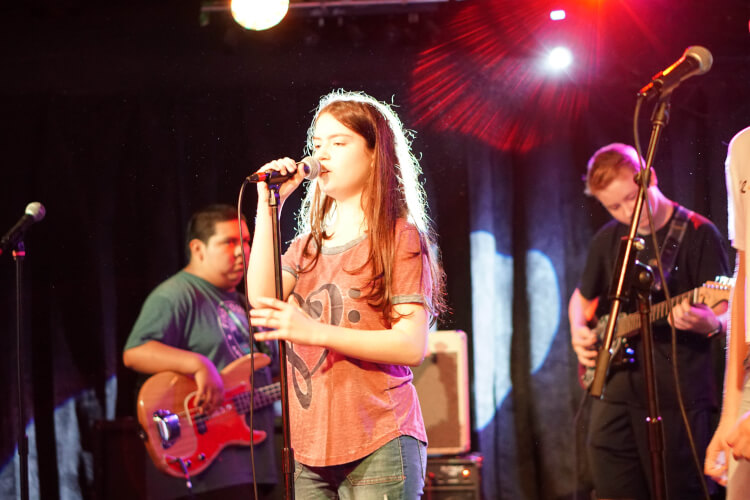 Amplify your child's summer with our Summer Seasonal shows!  Students are assigned songs and parts that are tailored to them based on their age, experience, and ability to learn new skills and concepts. Students then work through their parts in weekly private music lessons, and refine the skills and concepts that those songs introduce.  Every few months, Performance Program students take the stage and play at local music venues in front of a live audience.

Read below to see what we're offering this summer!

Get in your car and head to the drive-in, we're Rockin' the Movies with Rock 101! We'll be playing our favorite rock tracks from some of the greatest movies ever made. Don't forget the popcorn!

A TRIBUTE TO CBGB

CBGB stands for Country Bluegrass Blues, but those are definitely not the styles of music that made this New York concert venue famous in the late 70s and early 80s! The breeding ground for America’s New Wave punk scene, CBGB gave many now legendary bands their first break. Artists like Talking Heads, Blondie, Television, Patti Smith, the Ramones, Elvis Costello and the Voidoids would perform at the club regularly, and hang out there even more often. CBGB closed in 2006, but its legacy lives on - the club probably had the most famously disgusting bathroom in rock and roll history, and its front awning now hangs in the lobby of the Rock and Roll Hall of Fame.

Slayer, Metallica, Anthrax and Megadeth are often referred to as the “Big 4 of Thrash Metal”. These bands were the most visible and, many feel, the most influential of the thrash bands to emerge in the early-to-mid 1980's. The thrash sound was somewhat new, and these bands were seen as the leaders of a movement. Many of their albums have stood the test of time as metal masterpieces.  The Thrash Metal genre emerged in the early 1980s as musicians began fusing the double bass drumming and complex guitar stylings of the new wave of British heavy metal (NWOBHM) with the speed and aggression of hardcore punk.

Van Halen is an American rock band formed in Pasadena, California in 1972. Credited with "restoring hard rock to the forefront of the music scene", Van Halen is known for its energetic live shows and for the work of its acclaimed lead guitarist, Eddie Van Halen. The band was inducted into the Rock and Roll Hall of Fame in 2007.

We're going back to the 2000's!  In the early 2000s, there was an astounding resurgence of interest in pop rock and power pop, which was kickstarted with the success of bands such as Blink-182, Nine Days, Good Charlotte, Sum 41 and more.  2000's rock also spread to female musicians including Michelle Branch, Kelly Clarkson, Avril Lavigne, Alanis Morisette and more.  Get ready for a show full of pop punk, post-grunge, hard rock and more!

Pink Floyd were an English rock band formed in London in 1965. Gaining a following as a psychedelic rock group, they were distinguished for their extended compositions, sonic experimentation, philosophical lyrics and elaborate live shows, and became a leading band of the progressive rock genre. They are one of the most commercially successful and influential bands in popular music history.  Pink Floyd were founded by students Syd Barrett (guitar, lead vocals), Nick Mason (drums), Roger Waters (bass guitar, vocals), and Richard Wright (keyboards, vocals). Under Barrett's leadership, they released two charting singles and a successful debut album, The Piper at the Gates of Dawn (1967). Guitarist and vocalist David Gilmour joined in December 1967.

"Weezer is an American rock band formed in Los Angeles, California, in 1992. Since 2001, the band has consisted of Rivers Cuomo (lead vocals, lead guitar, keyboards), Patrick Wilson (drums), Brian Bell (guitar, backing vocals, keyboards), and Scott Shriner (bass, backing vocals).  After signing to Geffen Records in 1993, Weezer released its self-titled debut album, also known as the Blue Album, in 1994. Backed by music videos for the singles ""Buddy Holly"", ""Undone – The Sweater Song"", and ""Say It Ain't So"", the Blue Album became a multiplatinum success. Weezer's second album, Pinkerton (1996), featuring a darker, more abrasive sound.  Both the Blue Album and Pinkerton are now frequently cited among the best albums of the 1990s."

For more information about our programs, give us a call at 516-234-ROCK (7625) ext. 2 or email us at rockvillecentre@schoolofrock.com!