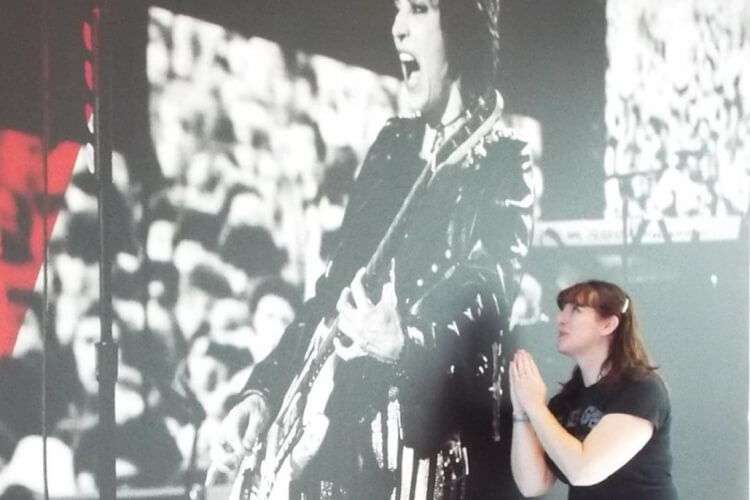 As a little girl growing up in the 1970s-era American Midwest, I felt like I had a bold new world of imagination at my feet. The women’s rights movement, through activism and legislation like Title IX in 1972, opened up options that were unthinkable for a female only a few years prior. I was encouraged to dream of who and what I wanted to be when I grew up, and I looked no further than my television and radio to find inspiration. I surrounded myself with all things music, so every TV show I saw and every song I heard spun together in a pop culture tapestry that still rings through my memories to this day. Within this web of art, I found three of my very own patron saints, the women who showed me that rock and roll wasn’t just for the boys: Suzi Quatro, Joan Jett, and Pat Benatar.

Suzi was the first one of these three to meet my eyes and ears. As a devoted watcher of the classic sitcom Happy Days, I watched her walk into the fictional Arnold’s Diner and I was riveted. She played the role of Leather Tuscadero, the kid sister of Fonzie’s frequent paramour and fellow daredevil, Pinky Tuscadero. She may have been a “kid” sister, but she was all grown up with a sassy attitude to match her head-to-toe black leather costume befitting her name. As a kid sister myself, I could see the parallels of wanting to strike out and be my own person. The second she stepped onstage and put on her bass guitar (a bass guitar!) I was filled with hope and anticipation. And once she started to sing and play, I had a new hero. Here stood a girl who looked like few others on my TV, but looked so much like me. She shook her tousled brown hair around and sang with a gritty growl and a power that I wanted to recreate someday. Of course the normal fan activities ensued, with her posters on my wall and my lip-syncing to her songs in the mirror. Many (many) years later, I found my way into a rock band, and if you look at me closely, you will find some of her moves and sounds included in my repertoire.

Joan was the next one to inspire me, and the first song I heard, or rather saw, was her signature hit, “I Love Rock n’ Roll”. When I was 11 years old, every Saturday morning was the same. I would roll out of bed with a yawn and a stretch, shuffle to the kitchen to pour my bowl of Fruity Pebbles, and plop on the couch to watch a couple of hours of cartoons. Then Dick Clark would appear on the screen and introduce American Bandstand, and I danced around my living room to the hits of the day and I imagined I was there with the teenagers on the flashy soundstage. This is the point where I should explain that I was not watching MTV because my parents took FOREVER to get cable, so I was left to scrape by with the three basic networks. Bandstand, in trying to keep up with the ‘80s, included music videos in their program, and in doing so they gave me my first look at Joan Jett and the Blackhearts. With her red jumpsuit, high top Cons, and coal black eyeliner, Joan gave me a first peek into the frayed edges of the punk rock genre that would soon take over my pre-teen heart. Like Suzi, she had all that edgy energy that I wanted for myself, and her influence also made it into my later (much later) onstage performances.

Finally, my introduction to Pat Benatar was what set me on my path as a vocalist. I found her on the same radios and TVs that brought me all the other rock stars, but she hit a slightly different chord with me that carried me to where I am now. In her interviews, they would inevitably ask her about her “classical training”, to which she always answered that yes, she might have been an opera singer if not for rock and roll. That line set the fire under me. I was already participating in the school choir, but as soon as I knew Pat had gone down a similar path, I wanted all the private lessons I could fit into my schedule, and I worked hard on improving my voice. All that work resulted in a college scholarship and a lifelong desire to always keep learning and always keep growing. Now, all these decades into my life as a singer, I am always looking to be better every day, and it is this same passion for rock and desire for growth that I hope to pass on to the next generation of young students here at the School of Rock. My three inspirations meant so much to me, and I am always interested in hearing who our students look up to in the same way. With every answer, I am reminded of why I am here and why I am so proud to do what I do.