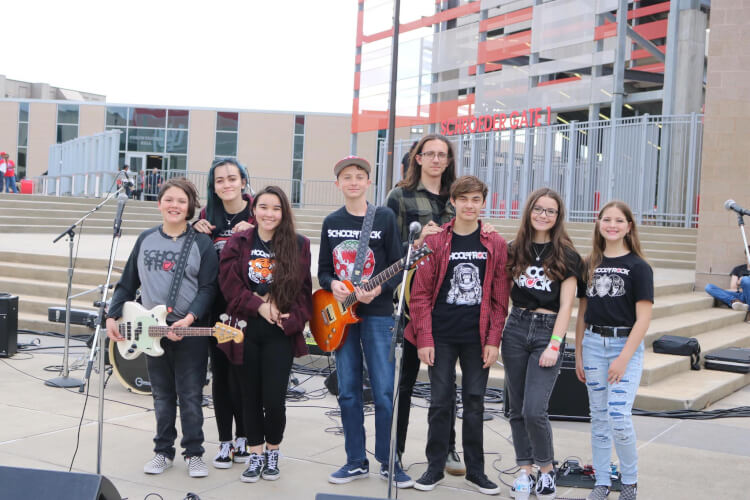 At School of Rock, children learn a performance-based curriculum and show off their skills at concert venues including White Oak Music Hall, The Continental Club and Smart Financial Centre.

Students take individual weekly lessons, in addition to practicing in a group band rehearsal once a week.

At the end of each season, student bands perform on a real stage for parents during daytime hours, when venues open up to the young musicians.

The chain’s philosophy turns traditional music school on its head, says Hugh Scott, who opened School of Rock West University in 2019 and will open a second franchise in the Heights this year.

Rather than learning by scales or rote drills, kids master a complete song they play with a band.

Children are more likely to stay committed to an instrument when they’re expected to perform in a group setting, Scott says.

When kids are learning songs by musicians they’re familiar with and enjoy — such as The Beatles and Red Hot Chili Peppers — it motivates them to get better, he says.

“You’re teaching them all of the same stuff, but in a fun and more approachable way.”

At concerts, a two hour set list might feature music by The Allman Brothers, Dolly Parton, Lynyrd Skynyrd and The Cure.

When his students perform at Armadillo Palace, Scott says they get a kick out of setting up in front of the wall signed by famous country acts who have played on the same stage.

Some kids are so shy at their first lesson, they have to be coaxed into the building, he says. By the time they’ve mastered a song, they flourish in a concert setting in front of a large live audience of parents.

“I’m talking full on rock-god guitar movements,” he says. “They’re not alone, they know the other students and they’ve spent a lot of time working with them.”

Alejandra Febre, who opened School of Rock Cypress in 2015, has seen the same transformation.

“It’s amazing the level of self confidence the stage will give them,” she says. “Music is a social experience. If you’re isolated in your room, you really don’t advance or enjoy it as much as when you’re playing with others.”

Her School of Rock location holds auditions for a student house band that represents the school at events, including South by Southwest in Austin.

Many of her pupils also are active in their high school bands and orchestras.

While performance-based classes begin at age 7, students as young as 3 can enroll in School of Rock’s starter classes to learn musicality and experiment with different instruments (schoolofrock.com).

This summer, some area day camps on offer are pop/punk, The Beatles, ’90s, blues, songwriting and metal.

COVID-19 safety protocols include temperature checks and mask requirements. In addition to wearing a mask, vocal students stand behind a plastic curtain while singing.

Virtual classes are available at some locations.

Andrew Huang, who was a music major in college, enrolled his daughter, Haley, at School of Rock Cypress to learn guitar, piano and vocals.

The performance-based model “really holds the interest of kids,” Huang says. “We never had to push her to practice. She wanted to learn her songs so when she played in the band, she covered her part.”

Because it’s music she liked, she mastered skills more quickly, he says.

“I learned the more traditional way,” he says. “For a lot of kids, they just want to be able to play for their own pleasure and not look at it as a career.”

“It gave her the tools to have music as a part of her life and to be able to sit in a room with friends and make music,” her dad says.

Allison Bagley is a Houston-based writer.