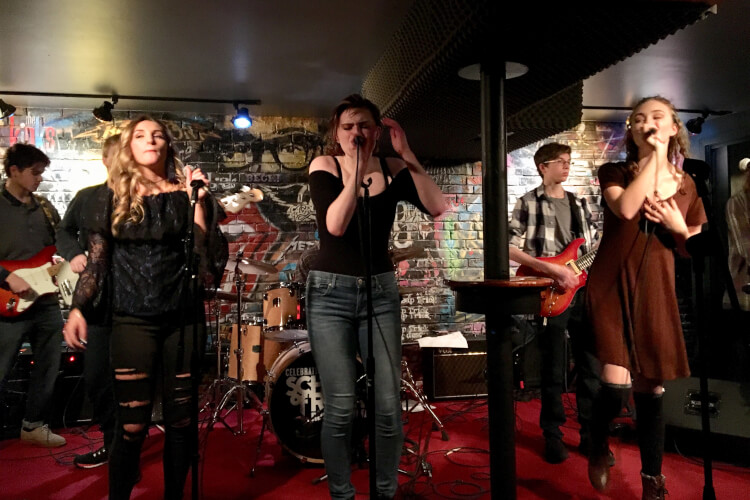 Wanke’s creative, heartfelt performance of Radiohead’s 1992 hit “Creep” scored her top honors at the 2017 Shining Star CLE talent competition for high school students. “I sang it in no way like the original,” she says. “I slowed it down and just tried my best to show [the judges] what I was feeling at that moment.” Her prize? A $10,000 scholarship and an opportunity to perform with the Cleveland Pops Orchestra. On New Year’s Eve, the 17-year-old musician joined them onstage at Severance Hall to sing “I Dreamed a Dream” from Les Miserables.Getting Schooled: For the last two years, Wanke has been practicing and performing with School of Rock in Mayfield Heights. She sings with their house band, an audition-only outfit that plays gigs at venues such as the Rock & Roll Hall of Fame and Blossom Music Center. “It’s all about connecting,” she says, “and making you feel something from what I’m singing.”Positive Outlook: Wanke stepped back from music during her sophomore year, when she took time off from school to deal with bullying and mental health concerns. “Once I had some time to myself and started thinking about how I really liked myself the way that I was, that’s when I started to really thrive,” she says. She joined School of Rock shortly thereafter.Rocker Chick: The former pop singer says School of Rock turned her on to a grittier sound. “Once I got into rock music, I finally found something I was really passionate about,” she says. Now, she counts Led Zeppelin and Janis Joplin among her musical influences.Check, Check: Of all the venues she’s performed in, Wanke likes the Rock Hall best — and her favorite part is the sound check before each show. “I just go up to the mic and sing literally anything,” she says.Music Maker: Wanke learned to play guitar at School of Rock, and she’s also a self-taught pianist who says her instrumental skills enhance her songwriting. “Once you put the music to it, it’s a whole other song — so that opens a new door.”Sports Fan: Before she devoted herself fully to music, Wanke played on the middle school basketball team, which was coached by her dad, Larry — who was also a 1991 NFL draft pick for the New York Giants. “I would stay up with him until 4 a.m. watching basketball tapes and making plays,” she laughs.