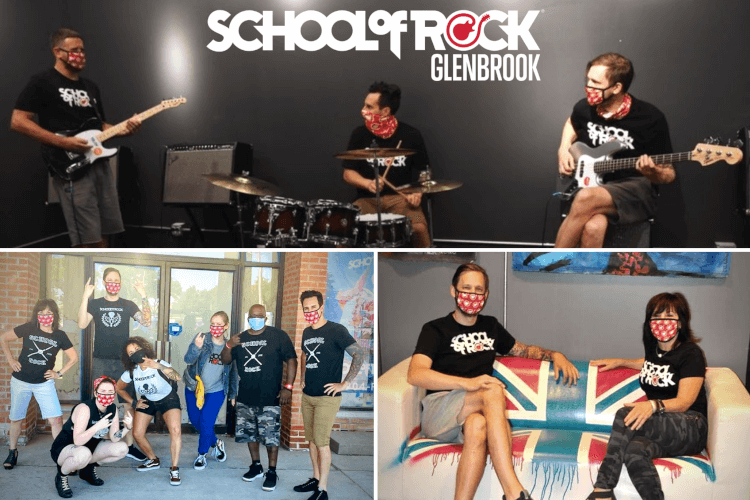 Do you want to be a rock star? A School of Rock is opening soon in Northbrook

August 14, 2020IN THE PRESSDaily Herald Article on School of Rock Glenbrook

Even as she decided to embark in a health care career, there was at least one subtle sign pointing Amy Renzulli to her true calling.

"I was looking for a job in health care, and I saw this ad that said something like, 'Do you want to be a rock star?' It was a classified ad in a newspaper, Renzulli recalled. "And I just told myself 'I'm going to convince them to hire me.'"

Renzulli got that job. And she got several more as she worked her way up the ranks of Blue Cross and Blue Shield of Illinois, searching for that ever-elusive sense of job satisfaction.

But it wasn't until her daughter, Abigail, started exploring her own interests at age 12 that a new siren song called to Renzulli,

"She came to me crying, 'You don't understand. I need music. I have no music. There's no music in this house,'" Renzulli said.

She Googled "rock camps" and found the School of Rock in Chicago, not too far from her home in Oak Park. At the end of the camp, her daughter joined some of the more experienced students to put on a live rock concert.

"I was in the front row going, 'Oh my God. This is the greatest thing ever,'" Renzulli said.

Renzulli looked into the school and found out it was a franchise. And, as she already knew, there was no location in Oak Park.

"A light bulb went off, and I decided I could pursue it," Renzulli said.

The decision marked a major career change, but Renzulli had models for making that work in both of her parents. Her dad changed courses, leaving his medical practice to pursue art. Her stay-at-home mom also switched tracks: She went to law school and eventually was a partner at a big firm.

"That's been big for me," Renzulli said. "To have a role model that, as a woman, you can do these things."

She bought a building in Oak Park, set about giving it a rock 'n' roll makeover, and built it into the largest School of Rock in the world. Seven years in, there are 420 students.

Now Renzulli is ready for an encore with a new location in Northbrook officially opening later this month.

School of Rock Glenbrook, 3139 Dundee Road, is built on the idea of bringing the same diverse and friendly atmosphere that makes the Oak Park location as much of a gathering space as a school. Renzulli said what she saw in Northbrook while scouting possible locations for a new school convinced her she could transplant her success to a more suburban location.

"Northbrook hit all the right buttons," she said. "There's a strong community. There's a lot of families with kids. It has an amazing chamber of commerce. And I just feel welcome here."

The new school will be an opportunity for several employees of the Oak Park location to grow into management opportunities and put to work some of the same tactics that built the biggest School of Rock in the world.

Dave Vazzano is the music director at the Northbrook location. He's been playing music since he was 12, right about the same age many of the school's students start to hit their stride. Vazzano still plays in a Chicago punk band, The Miserables, and in a popular wedding cover band called The Student Body.

Vazzano said the magic of the school is in watching students come in and work their way up to a live show.

"The first day of rehearsal, they can barely play a lick of any song," he said. "But once they make it out on stage, you just see something come out of them like never before. A lot of the kids are super timid and barely say anything when they first come into the school. After a show or two, you see this outgoing person come out of nowhere. But I guess that's what rock 'n' roll does to people."

COVID-19 slowed the build-out of the new location. But that provided the opportunity to put more work into transforming the school into a music destination rather than just another shop mixed in with a bunch of other businesses. The Oak Park location is wallpapered with posters promoting a variety of live student performances from recent years. A colorful mosaic on the side of the building announces the musical heart of the structure from well down the street.

"It was soul-sucking to open up in a strip mall," Renzulli said. "When people come here, I want them to forget they are in a shopping center. We are going to have a lot of art to make the space come alive."

Renzulli working with artists in her own family and the Glenview Art League on large canvases enriched with music-inspired art.

There's also a push to make sure the school is as inclusive as possible. There will be scholarships and a focus on diversity in staff to match whatever families walk through the door.

"We want to have all shapes and sizes and races and identities at our schools," Renzulli said. "It's important for people who come to us to see somebody that reflects them. And I always knew I didn't want to open a country club. I didn't want a place that only rich people could go to. I want it to be accessible to anybody who needs music."

The school has already had a soft opening and started to enroll students. But the school staff will have a curtain call with a full-blown grand opening at the end of August. With it will come one more step in Renzulli's transformation toward being both a business and a literal rock star.

She sings in an eight-member band called Some of the Parts. It's a reference to the adage, "The sum of the parts is greater than the whole." Renzulli's best song is "Hard to Handle" by The Black Crowes. And now she's about to add a new element to her stage presence.

Her first tattoo will be bleeding hearts with flowers stretching across them. Her daughter is designing it.

"People say I wear my heart on my sleeve," Renzulli said. "Now I actually will. I can't wait to get it."

For information about the School of Rock Glenbrook and their classes, visit locations.schoolofrock.com/Glenbrook or call (224) 904-7625.