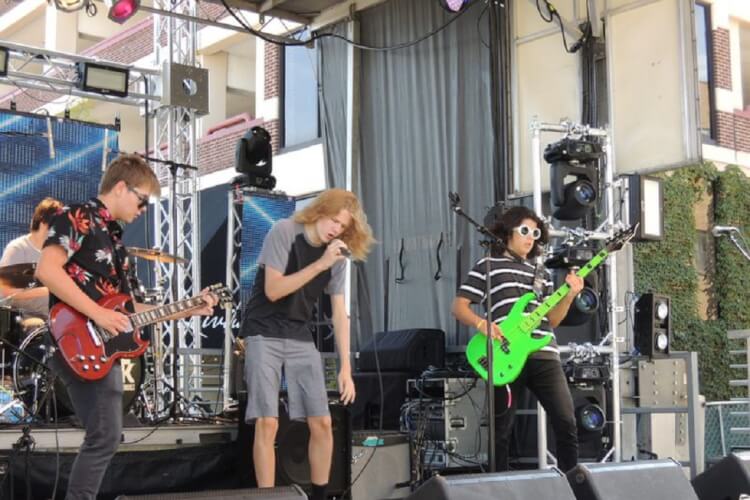 Rock the Block draws families to Elmhurst for music, food and fun

September 9, 2019IN THE PRESSRead the Full Story Here

With free wristbands and the appropriate number of $1 tickets, those old enough could also purchase beer and wine. Sopko said a change to cans for both beer and wine this year was greener in terms of recycling and faster in terms of service.

Music and food may have been the draws on both evenings, but Saturday’s Family Fun Zone was a major attraction for the younger set and their parents. Free activities along the south end of York Street, closed for the occasion, including face painting, a photo booth, a chance for young rockers to try their drumming skills and even a brief tutorial in Taekwondo from master Jounghyun Park.

Dennis Holmes, a first-time visitor from Arlington Heights, was in the face painting line with his 2 1/2-year-old daughter Denise. He said he was attracted by activities for kids.

That was also the attraction for Joe Hussar, whose 6-year old daughter Ava had just learned how to use her fist to split a piece of wood. It wasn’t clear whether Ava’s 4-year old sister Lily was going to try her “hand” at the exercise.

Sopko noted the weather cooperated, with only a couple of minutes of light sprinkles Saturday evening. She was expecting a final estimate of crowd size from the Elmhurst Police Department, but said social media ahead of the event had drawn at least 4,500 people, a 25 percent increase over the 2018 event.