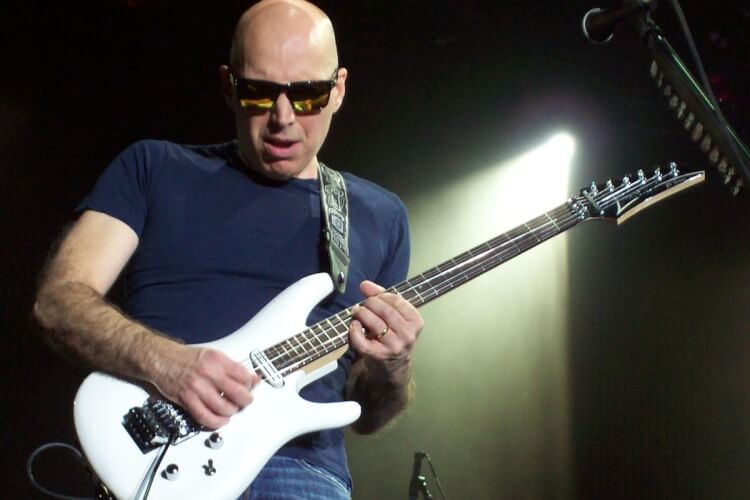 Joe Satriani shares advice for finding your voice on the guitar: "Always record yourself"

As electric guitar teacher to the stars and bona fide shred god, there are few players better placed to offer six-string guidance than Joe Satriani, so when the lord speaketh, we sit up and listen.

Those latest words of wisdom come from an interview with GuitarGuitar, where Satch was asked about his advice for players seeking to find their own voice on the instrument. As always, his response was well-considered.

“It’s so easy to record yourself now,” he muses. “If you’ve got a phone, laptop, computer, whatever, just always record yourself. And sit back and develop an opinion about every scale, every chord, every juxtaposition of the two, rhythms, picking techniques.

“When you practice, stand in front of a mirror, not to check how cool you are [laughs] – but to look at your hands, and to think about it, you know?”

Of course, practice is what really counts – and it’s the route to G3, too.

“It’s so important, and it’s something I realize every time I go out on a G3, how much time every guitar player puts into practicing,” Satch continues.

“Every guitar player that we’ve had out on a G3 tour has been a model citizen in terms of being a fantastically dedicated musician.

“To watch them practice, it’s just awe-inspiring. Then you see them go onstage, and they turn on the ‘entertainer’, but they keep that other part of them. You know it because you’ve heard them all afternoon long backstage, practicing to a metronome!”

The interview also provided an update on the progress of the first of Satch’s two(!) lockdown albums, via a question about the positive nature of his music.

“My natural state is to brood on things, definitely,” Satriani responds. “I can be really moody; you can ask my wife about that [laughs]. It’s something that I’ve relied on to help me focus on stuff.

“It’s funny, over here there’s my Pro Tools rig and I’m working on a new album. We’re about twelve or thirteen songs in now – an instrumental album with the live band.

“And just yesterday, [producer] Eric Caudieux was saying, ‘Oh, what about this song? It’ s one of my favorites that you wrote.’ And I said to him, ‘It’s another slow, brooding song from me!’ And he said, ‘Yeah, but it’s great, we should do it anyway!’

“It reminded me that I generally write, like if I’m gonna write 30 songs, there’s gonna be 25 sad, dark, you know [laughs]… and then, how I redeem myself, how I pull myself out is to write a Summer Song or something, to convince myself that, ‘Ah, everything’s okay, Joe, don’t worry about it!’”

Earlier this year, Satriani reported that he was working on a pair of albums during lockdown: one instrumental album, and one that was more “vocal-oriented”.

Last month, the shred icon also dropped his collaboration with IK Multimedia, AmpliTube Joe Satriani, which offers modeled versions of the tones used throughout his career