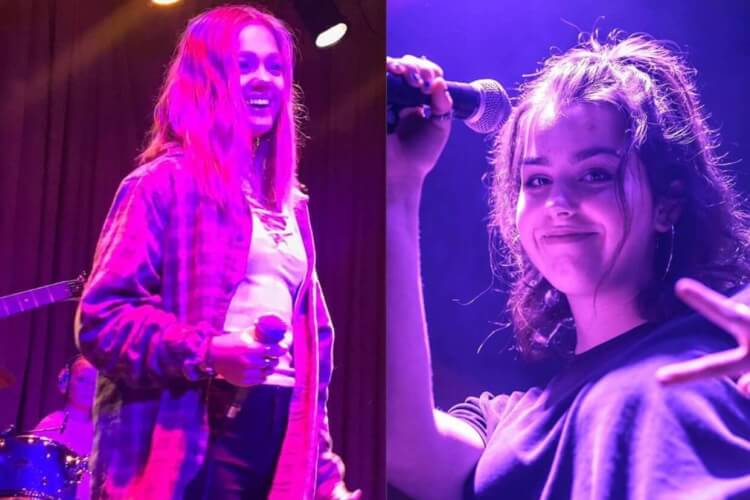 Since its formation in 1998, School Of Rock has dedicated itself to educating thousands of students worldwide, giving them the tools to succeed both on and offstage. In the years since, SoR students have competed on American Idol and The Voice, toured the nation in productions such as Blue Man Group, and have frequently turned heads in the music industry — so much so that in 2019, Atlantic Records approached School Of Rock to create a one-of-a-kind contest called Center Stage.

Center Stage encouraged singers worldwide between the ages of 13 and 19 to submit a performance video online. The Center Stage team would then select 30 winners who would be flown out to Los Angeles to perform in front of a panel of music industry executives as well as record their own original material in a professional recording studio. Two of those winners, Angela Krish and Madeline Scarvelli came from School Of Rock Cleveland, making it through multiple online audition rounds and beating out thousands of applicants from across the world in the process.

“I heard about Center Stage from my vocal instructor Scott and the school GM Louie,” says Krish, a SoR Cleveland West student. “I thought it would be amazing to be flown out to L.A. and perform, but what I really was excited about was being able to record in a studio and get feedback on my songs. I never expected to be one of the winners, I was shocked when I was one of the few kids who were offered this experience.”

“I was inspired to enter the Center Stage competition by my mom,” says Scarvelli, a student at SoR Highlight Heights. “She saw the flyer on the front desk, so she and our school’s general manager convinced me to enter. It was crazy to be one of 30 winners. I was out with friends and my mom texted me a screenshot of the email. My friends and I were in the middle of a park and we began jumping up and down, smiling and screaming because I was about to have a crazy experience.”

In December, Both girls were flown out to Los Angeles, where they, alongside 28 other winners, would get to perform three songs at the legendary Roxy Theatre and receive valuable feedback about their technique, stage presence and overall performance.

“I began my performance with ‘River’ by Bishop Briggs, a song that really has spoken to me for some time,” Scarvelli recalls. “The second song I sang was an original called ‘Cycle.’ It reflects my anxiety and feelings a lot of the time. The last song I sang was ‘Barracuda’ by Heart. I performed that song during Highland Heights’ Women Who Rock show last season and I loved it. Overall, the performance went very well, and I was extremely lucky to be able to have that amazing experience.”

Krish performed two originals, “Someone Else” and “Dreams” — the latter of which she had written just four days prior to the showcase — as well as a cover of “House Of The Rising Sun,” made famous by the Animals.

“The day of the performance I was really nervous simply because I don’t do a lot of solo performances, but by the second song I felt way more confident,” she says.

After performing, each girl was whisked away to a private recording session where they were able to lay down whatever material they wanted and take the master recordings with them. Both students say this was the best part of the entire trip.

“The studio was by far one of the coolest things I’ve ever done in my life,” Krish gushes. “I had never been in a studio before, so being able to record my own songs was an amazing experience. I was able to record both of the original songs I had written and I even had the chance to add harmonies and strings to one of them. It was really cool to see that everyone liked my originals, and at the end of it all, I was really proud of my work.”

“The recording studio time we were offered was literally the best experience of my life,” Scarvelli agrees. “I had so much fun recording and learning all about the equipment, how tracks can be layered, and many other things. I recorded my original song, ‘Cycle,’ and once it was finished, it sounded amazing. I can’t even explain how incredible it was. I was in my element, adding in harmonies, playing around and doing whatever I wanted”

Now that both teens have returned home, they’ve had some time to reflect on this once-in-a-lifetime experience.

“My biggest takeaway from the Center Stage experience was developing more confidence,” says Scarvelli. “I felt extremely at home with everyone there and very comfortable. I also definitely understand the art of recording better, which will help with the projects I would like to complete in the future.”

“My biggest takeaway from the Center Stage program was that I realized how much I really, really love creating songs,” says Krish. “Being in the studio was the time of my life, and I plan on working really hard to be able to do it again.”

The world hopefully won’t have to wait long to hear Scarvelli and Krish: Each singer has plans on releasing their music digitally in 2020. Scarvelli says she has written “about 30 songs” which she plans on cutting down to an EP, while Krish, a high school senior, continues to write and record at home while she applies for colleges.

“I’m working on getting into the music program at NYU where I will get to learn different ways to write songs and production techniques used in the studio,” she says. “I plan on becoming a professional songwriter or maybe a producer — but definitely something in music.”