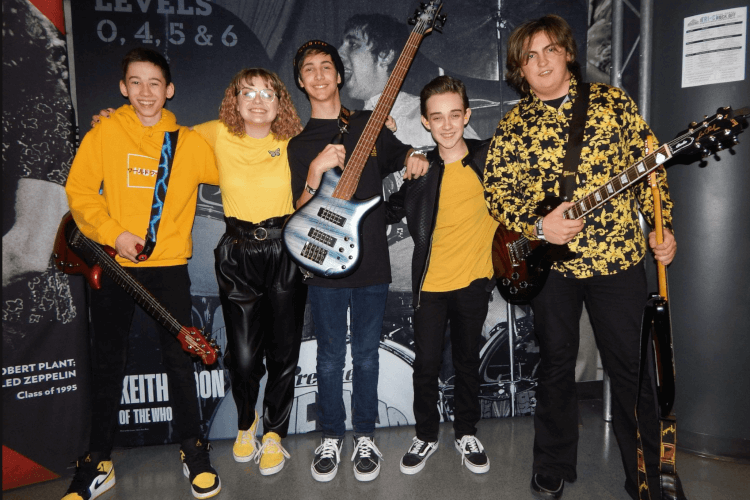 Close to three years ago, singer Norah Hyman met guitarist Ryan McKendry and drummer Ethan Ventresca at a local School of Rock program. They hit it off and decided to form the modern rock band Fake ID. Just this week, they released their guitar-heavy first single, “Good Times.”
“We all liked playing music together and had great chemistry together and liked hanging out together, so we thought it was a no brainer to form a band,” says Hyman during a phone interview. “We all have different taste in music, and we merge that together when we write our songs. We played a lot of classic rock while we were at School of Rock.” After its first gig at a Chagrin Falls ice skating rink where it played a 90-minute set, the group has regularly played locally even though its members are still in high school. For the past two summers, the band has played Ohio Bike Week in Sandusky. “That’s one of my favorite shows,” says Hyman when asked about Bike Week. The band also now includes guitarist Ty Jacobs and bassist Carson Siegel. “It’s such a nice environment. It’s a huge stage, the sound is really good and people really enjoy watching us. We get a decent crowd.” As a benefit of making it to the finals at this year’s High School Rock Off, the group took advantage of the opportunity to record at Tri-C with local producer Jim Stewart. He cut “Good Times,” a song that Hyman says was inspired by her memories of her late grandparents. “Around two years ago, both my grandparents passed away 24 days apart from each other,” she says. “I put everything I was going through into that song. I was trying to reflect on the good times we spent together instead of focusing on the fact that they’re not here anymore. It took me three or four months to write the lyrics, and it’s really evolved over time too.” The band had planned to get together to write more songs over the summer, but social distancing has so far prevented that from happening. “We have about five songs right now,” says Hyman, who hopes that a June 14 gig at Crocker Park can still take place. “We’re all writing right now, so it's just a matter of getting the pieces and parts together.”